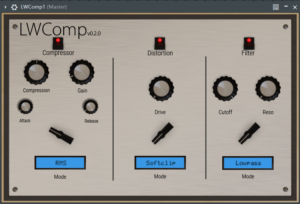 Over the past few months, I’ve been digging my feet into learning DSP – and it’s safe to say this is what I want to do with my life. I’ve built a few plugins before this one, but it’s probably for the better that they stay unreleased. LWComp is my first big project that I’ve organized and intended on releasing. I am planning on releasing it as a free plugin not because I don’t feel it could compete with paid plugins, but because this is something I made that I needed. In my own productions, I have the same chain of effects on many of my busses: Compressor – Distortion – Filter. Lots of times I’ve used this chain on drums and vocals, so it was natural that I try to make a plugin that encapsulates all of these.

The issue with trying to make a plugin with the high school math level that I know, it quickly turned into a game of looking at YouTube videos from 2009 about a topic that is outdated anyway. I found myself going through complex topics without learning the fundamentals of them first – and that was a big setback. The way I learn best is through looking at code or math examples that have the same issue / solution that I have – and that was is pretty slow. Thus, I ended up in the classic scenario with the equivalent of making a cruise ship when I know how to make a paper boat. I have one slight advantage (in my opinion) that helps me though: I’ve been in both ends of music production – the music side and the development side. I know what it’s like waiting ten seconds for a plugin to load; I know what it’s like to learn a complicated interface. I’ve been there, and I know what to do and what not to do in developing plugins. I can guarantee there are hundreds (if not thousands) of developers who are 1000x more skilled than me. I am nothing compared to Steve Duda or Matt Tytel, but I’m going to put the effort in to see it that I can become someone else 🙂

So enough rambling, here are some details about LWComp:

I am still setting a release date, but my aim is to release it by the end of February. Stay tuned 🙂